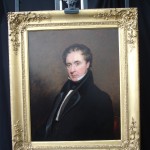 This is a nineteenth century oil portrait of Alexander Falconer which has been conserved for the reopening of the museum. Alexander Falconer first came up with the notion of building a museum here in Forres and donated £1000 to this cause. The artist is unknown, and there appears to be no signature. Before the painting was treated the conservator found a large amount of dirt on the surface and several areas which had been previously repaired very poorly.

This oil painting was restored by Matthew Egan & Rose of Dundee in 2007-2008. These photographs show the portrait before, during and after the conservation.

The Portrait Before and After

The Back Before and After