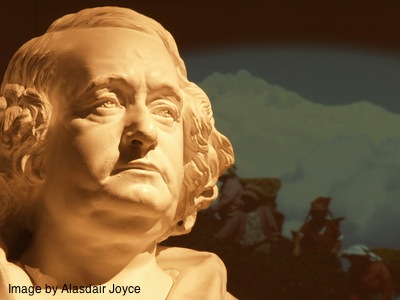 Hugh Falconer MD, FRS (February 29, 1808 – January 31, 1865), was a distinguished geologist, botanist, palaeontologist and paleoanthropologist. He studied the flora, fauna and geology of India, Assam and Burma, and made the first discovery of the modern evolutionary theory of “punctuated equilibrium” which states that most sexually reproducing species will show little change for most of their geological history. He may have been the first to discover a fossil ape, as well.

In 1826 Hugh Falconer graduated at the University of Aberdeen, where he studied natural history. He later studied medicine in the University of Edinburgh, taking the degree of M.D. in 1829. During this period he attended the botanical classes of Prof. R. Graham (1786-1845), and those on geology by Prof. Robert Jameson, the teacher of Charles Darwin.

In 1830 Falconer became an assistant-surgeon with the British East India Company in Bengal. In Bengal he examined the fossil bones from Ava, upper Burma in the possession of the Asiatic Society of Bengal. His description of the fossils, published soon afterwards, gave him a recognized position among the scientists of India. Early in 1831 he was posted to the army station at Meerut, India, in the North Western Provinces.

Falconer became Superintendent of the Saharánpur botanical garden, India from 1832-1842 during which time he became widely known for his study of fossil mammals in the Siwálik Hills. Perhaps most notably, he observed long periods of evolutionary stasis in these mammals with short periods of rapid evolutionary change throughout geological time. This research shows great foresight; Niles Eldredge and Stephen Jay Gould developed the same basic theory a century later, a theory known as punctuated equilibrium.

Falconer and his associates may have made the first discovery of a fossil ape, in the 1830’s in the Neogene deposits in the Siwálik Hills. In the Tertiary strata of the Siwálik Hills in 1831 Falconer discovered bones of crocodiles, tortoises and other animals. With others, he later brought to light a sub-tropical fossil fauna of unexampled extent and richness, including remains of Mastodon, the colossal ruminant Sivatherium, and the enormous extinct tortoise Colossochelys Atlas. Falconer also published a geological description of the Siwálik Hills in 1834. For these valuable discoveries he and Proby Cautley (1802-1871) together received the Wollaston Medal from the Geological Society of London, its highest award, in 1837.

In 1834 Falconer was asked by a Commission of Bengal to investigate the feasibility of growing tea commercially in India, where black tea was introduced on his recommendation to be competitive with Chinese tea.

Falconer left India in 1842, because of ill health. He brought with him 70 large chests of dried plants and 48 cases of fossils, bones and geological specimens. He then travelled throughout Europe making geological observations and was elected Fellow of the Royal Society in 1845. Continuing in the service of the British East India Company as a naturalist, he pursued research at the British Museum and East India House and prepared casts of the most remarkable fossils for the leading museums of Europe.

In 1847 Falconer became superintendent of the Calcutta Botanical Garden, and professor of botany in the Medical College, Calcutta, near his older brother, Alexander Falconer, a Calcutta merchant. Hugh Falconer served as an advisor to the Indian government and the Agricultural and Horticultural Society of Bengal, the de facto colonial “Department of Agriculture”. He prepared an important report on the teak forests of Tenasserim, and this saved them from destruction by reckless felling. Through his recommendation, the cultivation of the cinchona bark was introduced into the Indian empire.

Having to leave India again in 1855 because of ill health, he spent the remainder of his life examining and comparing fossil species in England and the Continent corresponding to those which he had discovered in India, notably the species of mastodon, elephant and rhinoceros. He also described some new mammalia from the Purbeck strata of Wessex. Turning to the subject of human origins, he reported on the bone caves of Sicily, Gibraltar, Gower and Brixham from : “Hugh Falconer” Wikipedia, the free encyclopedia. 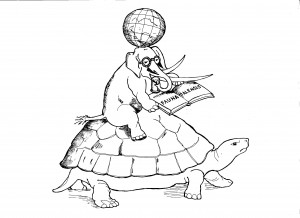